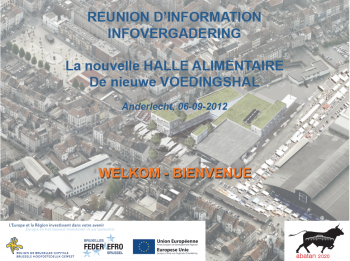 In relation to the construction plans for a new Food Hall next to its famous, listed market hall, Abatan nv organised an information meeting to inform local residents about these plans and to check out any local worries and concerns.

Invitations to the meeting were distributed through a door-to-door delivery in the immediate vicinity of our market hall. The meeting was not only attended by interested traders but also by families with children and older residents who have lived in the neighbourhood for dozens of years.

Mr Joris Tiebout, the Executive Director of Abatan nv, opened the meeting by welcoming everyone and thanking them for their interest. He emphasised that the initiative for the meeting was not based on some potential legal obligation, but on a genuine concern among the project leaders to inform people on a voluntary basis about the works which will soon start with scaffolding (with the works scheduled to start in March 2012), on the expected progress and the eventual results and purpose.

'We are not project developers who just put down a building somewhere, reap the profit and then move on to the next project', clarified Mr Tiebout. 'On the contrary, this is a residential and business project where we, the initiators and developers, already living and working, and we will continue to do so in the future', added Joris Tiebout, before handing over to Architect engineer Jo Huygh.

Jo Huygh took the audience on a detailed excursion through the entire project - you will find the presentation in the annex - followed by a traditional question and answer session. The first reaction was already a heartfelt congratulations for this beautiful project, which was acknowledged to bring added value to the current neighbourhood, which can definitely use a boost of that nature.

Like every project, this one has benefits and disadvantages, proponents and opponents. Various points of concern were raised,  at times with quiet resignation, at other times with a little more emotion or with a sense of humour. The experts involved with the project who were present at the meeting were in any case in complete agreement that the criticisms voiced were extremely constructive.
In summary, it would be fair to say that noise pollution and mobility cause the most concern to nearby residents. This is already the case at present, and it is feared that both forms of inconvenience will become worse still. The future will tell what the eventual impact will be.

Questions were asked on why the meat hall was 'moved' towards the Bergensesteenweg, and a reassurance was given that this decision was deliberate, after a study had indicated that the vast majority of visitors to the market came to buy a 'mixed basket of goods', and rarely only to buy meat. Bringing it all under one roof in the Food Hall was decided based on a concern to improve the logistics and overall hygiene. 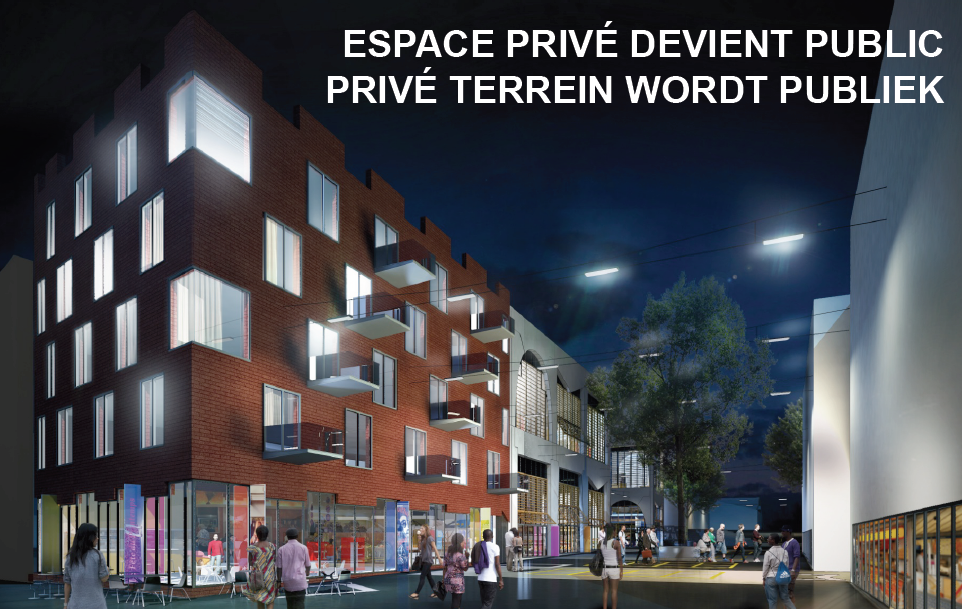 The arrival of 21 flats on the site without an additional car park, as part of which a section of Abatan's private land will become public, was far from popular with some of the people present.

In his closing speech, Mr Tiebout thanked the people present for their openness and for the dignified and respectful manner in which they expressed their concerns and criticisms. With reference to his introduction, he repeated emphatically that this project was preceded by numerous studies and surveys and that no chances were taken with it. He underlined  the efforts that NV Abatan has already made in the past to create as little disruption as possible with any new activity, to the social fabric and the diversity of the neighbourhood. The new project must also be seen in that perspective.

Afterwards, most participants enjoyed a refreshing pint in the Boeremet, underneath the covered market.

The presentation used for the information meeting can be downloaded here (bilingual French/Dutch only, apologies).