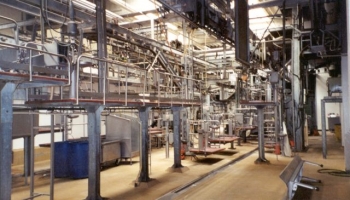 The "abattoir's" equipment and facilities are the most modern ones of their kind. Nowadays, the abattoir still has two slaughter lines (since 1984); one for pigs and one for large animals (cows, horses, calves, sheep and deer).

Each year, about 230,000 animals are slaughtered here, approximately 2 to 3 % of all animals slaughtered in Belgium (in comparison with 14% in 1934). Ritual slaughter also takes place at the site.

A tradition of quality

In fact, this is what it all started with: the trading and butchering of animals, and the boning and selling of quality meat. More than a century later, the “abattoir of Anderlecht”, as it is popularly known, has grown into a centre where more than forty experienced specialists, who have become one with their trade, can be found under one roof. The slaughter lines and the butcher’s equipment are continuously renewed and modernized, often at the cost of substantial additional investments. Hygiene rules are very strict too, and subject to frequent controls.